Skip to content
Powell River Hospice Society | Who we are | History 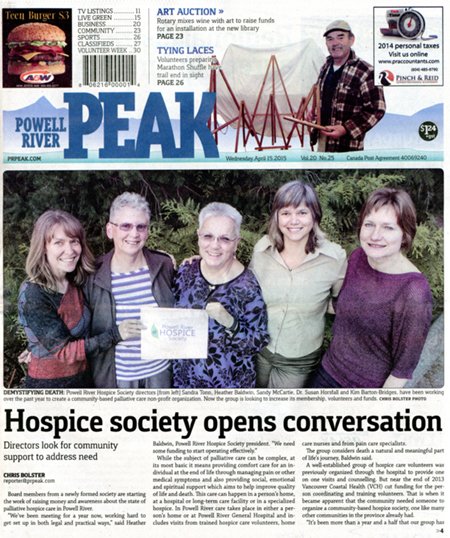 April 10th, 2014 — The first meeting of a large number of community individuals interested in forming a hospice society takes place. Steps are taken to form bylaws and a constitution.

May 3rd, 2015 — Powell River’s first annual Hike for Hospice takes place in conjunction with the national Hike and raises more than $5,000.
— First Credit Union presents us with a ‘Community Impact Grant’ of $4150. Here is a news story from Shaw TV aired in advance of the event, and describing the work we do in Powell River: https://youtu.be/0E-LahfG7cE

Fall 2015 — The first group of hospice volunteers complete their training. The Powell River Division of Family Practice provides support by paying for a contracted Hospice Coordinator for more than a year to assist the Society while it continues serving the community.

May 2016 — The PRHS receives $400,000.00 from the BC Centre for Palliative Care for the development of four community hospice beds.

May 2017 — There are now over 50 trained hospice volunteers in Powell River.

August 2017 — The Society is granted Charitable Status.
— The Society is awarded $5000 by the BC Centre for Palliative Care to host community Advance Care Planning workshops.
– Vancouver Coastal Health (VCH) agrees to provide ongoing operational costs for the Hospice House. The Regional Hospital Board works with the Society and VCH on the building project.

"Hospice" (noun) is derived from the Latin word "hospitium," which means hospitality or hospitable.

"Palliative" (noun or adjective) or "palliate" (verb) is derived from the Latin "palliare," which means to cloak (from www.chpca.net).

1969 — Dr. Elisabeth Kubler-Ross publishes On Death and Dying, the best-selling book based on more than 500 interviews with dying patients. The book argues for patient choice in end-of-life care.

1994 — The Canadian Palliative Care Association (CPPCA) is established in Ottawa.

2003 — The first national Hike for Hospice is held, raising more than $300,000 across Canada for community-based hospice-palliative care.